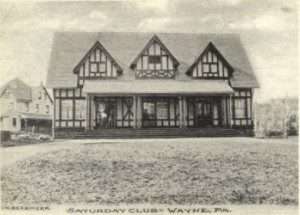 The Saturday Club was formed to fill a need for women in the community to enrich their own lives outside the home. The club’s official motto “Dare to be Wise” gives a clue to what ladies of the late 1880’s faced when attempting to broaden their horizons. At the time, it was radical for women to meet outside the home or even call their association a “club.”

Twelve enterprising women, who accompanied their husbands to Wayne where they would conduct business, first met on Saturday, February 16, 1886 in Wayne Hall (no longer standing) adjacent to the Wayne Presbyterian Church. And so The Saturday Club – one of oldest women’s clubs in Pennsylvania and nationwide – was born.

Meeting programs usually took the form of papers presented to each other on such topics as literature, science, art, music, and matters of the household. In 1894, the club’s purpose became more oriented toward activism with the addition of the Philanthropic and Legislative sections.

In 1895, when Saturday became a school and business holiday, the club’s meetings were changed to Tuesdays. The name of the club, however, remained unchanged and today, the club continues to hold its monthly membership meetings on Tuesday evenings.

In 1898, club members pooled their resources to purchase the lot and build the clubhouse where it still stands. Designed by architect David Knickerbocker Boyd and modeled after William Shakespeare’s home in England, the Tudor-style building was placed on the National Register of Historic Places in 1978.

The Saturday Club has demonstrated its commitment to the surrounding community throughout the duration of its long history. Highlights include:

In recent years, the club has greatly increased its focus in fundraising and philanthropy. Highlights include: