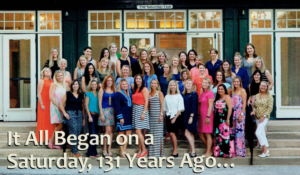 On Saturday, Feb. 16 1886, 12 enterprising women who accompanied their husbands to Wayne – where men went to conduct business – met for the first time in Wayne Hall. The number may have been small but their impact was mighty, as the revolutionary group of women began what would eventually be Pennsylvania’s (and perhaps the nation’s) oldest women’s clubs still in operation.