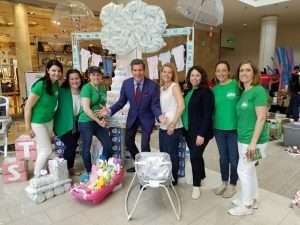 The Saturday Club was honored to participate in a unique exhibit at the King of Prussia Mall just outside of Bloomingdale’s called ‘Works of heART’, benefiting Laurel House, a domestic violence agency located in Montgomery County. The Saturday Club, along with several other local groups, was asked to create a structure out of donated items that would all be donated to Laurel House and the women and families they support.  The theme for the exhibit was “Healthy Relationships, Strong Communities. 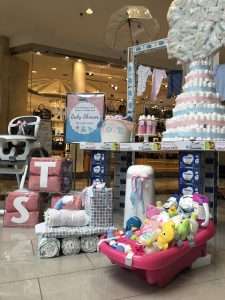 Inspired by Laurel House’s list of needed items, The Saturday Club chose a baby ‘shower’ theme. The centerpiece of the sculpture was an extra-large, 7 tier cake made entirely out of diapers. Additional items included: a toy train made from baby blankets, cotton ball clouds, a clothesline of onesies, sock flowers and much more. A fun and whimsical display, made entirely from contributions donated entirely by the Club’s members, the sculpture won top honors during the Laurel House closing ceremonies.

Fox News coverage of the exhibit highlighted The Saturday Club’s involvement and a committed crew of members who spent hours assembling the donations to create the carefully planned sculpture.

The Laurel House is the region’s largest comprehensive domestic violence agency, that works with more than 9,000 individuals each year to offer one or many of the following services: emergency shelter, crisis intervention, transitional housing, clinical counseling, medical and legal advocacy, a children’s program, and preventative education in 22 school districts.